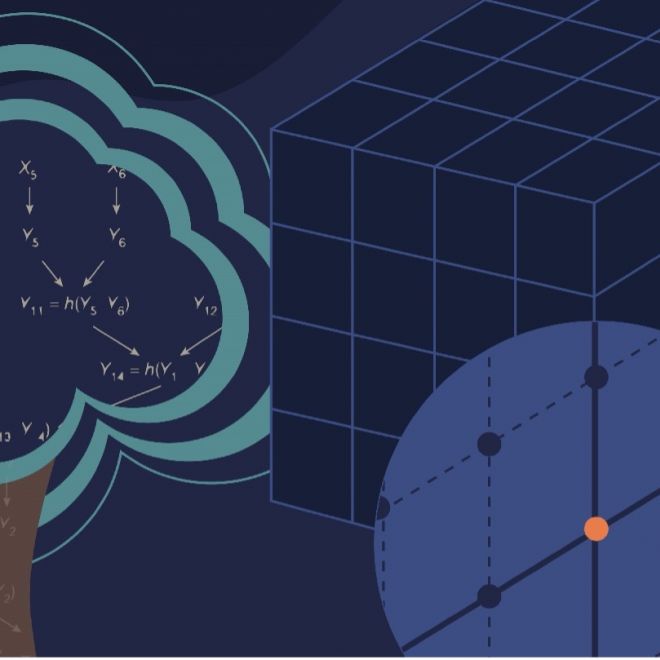 Caption: The first four algorithms NIST has announced for post-quantum cryptography are based on structured lattices and hash functions, two families of math problems that could resist a quantum computer's assault. (Credit: N. Hanacek/NIST)

While browsing the web, you might not realize that the security of your online transactions is guaranteed by a hard-to-crack math problem called factoring. But this security could evaporate in an instant—if a big enough quantum computer is built. Computers that store information in quantum hardware—like individual ions, atoms or photons—would make quick work of the factoring problem and threaten the safety of current protocols.

To thwart the threat posed by possible quantum computers, the National Institute of Standards and Technology (NIST) has been running a kind of competition. NIST provides standard references for all sorts of things, from the meter to the kilogram to baking chocolate (NIST isn’t dictating how your chocolate should be baked, just providing a reference for food labs so they can measure their ingredients accurately). But for this competition, they needed to weed through competing quantum-proof online security algorithms. More than 80 candidates faced off through several rounds of elimination. The winners of this showdown, announced by NIST on July 5, 2022, will go on to be standardized and used to create new internet protocols.

In this episode of Relatively Certain, Dina Genkina chats with Lily Chen, a mathematician who heads NIST’s Cryptographic Technology Group and who led the algorithm competition, to get the play-by-play on how standards get made. They are joined by Andrew Childs—a professor of computer science at the University of Maryland, a co-director of the Joint Center for Quantum Information and Computer Science and the director of the NSF Quantum Leap Challenge Institute for Robust Quantum Simulation—who provides background on the threat that quantum computing poses to our existing encryption methods.

This episode of Relatively Certain was produced by Dina Genkina, Chris Cesare, and Emily Edwards. Music featured in this episode includes Picturebook by Dave Depper, Dusty Vinyl by HoliznaPATREON, Say Goodbye to Lunar Gravity by Jack Adkins, and Inspiring Ambience by Scott Holmes Music.  Relatively Certain is a production of the Joint Quantum Institute, a research partnership between the University of Maryland and the National Institute of Standards and Technology, and you can find it on iTunes, Soundcloud or Spotify.