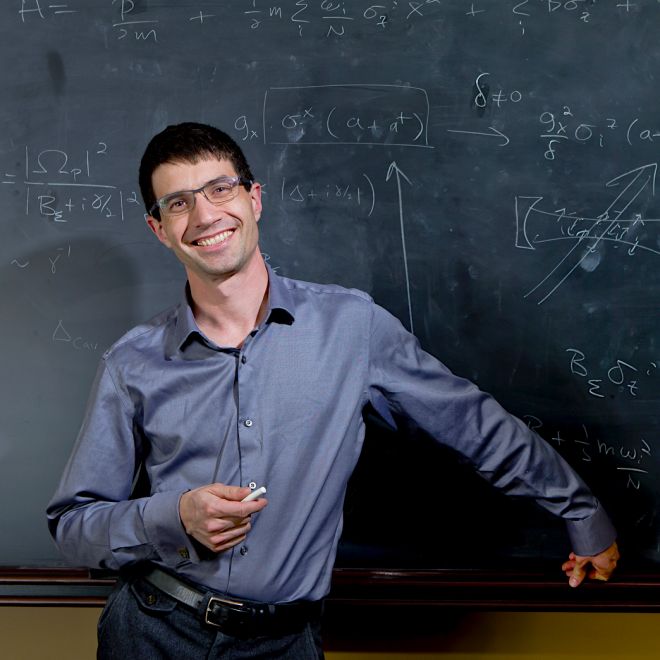 A Fellow in the Joint Center for Quantum Information and Computer Science (QuICS) was recently recognized by the federal government for his role in expanding U.S. policy and efforts in the fiercely competitive field of quantum information science.

Jacob Taylor, a physicist at the National Institute of Standards and Technology (NIST), is the recipient of the 2020 Gold Medal Award from the U.S. Department of Commerce.

This is the highest award given by the department, which oversees activities at NIST. It recognizes individuals or groups that provide extraordinary, notable or prestigious contributions that reflect favorably on the department and impact its mission.

Taylor was specifically cited for his work in the White House Office of Science and Technology Policy (OSTP), where he served from 2017–2019 and spearheaded an initiative to expand and coordinate federal efforts involving quantum computing, sensing, and communication research and development.

While at OSTP, he interacted with a multitude of federal agencies and external stakeholders to craft a comprehensive U.S. policy in quantum science, organized the quantum information science (QIS) community, and worked closely with policy teams both within and outside the White House to integrate administration approaches with legislative efforts and enable effective execution of the nation’s expanded QIS research agenda.

The result was the National Quantum Initiative Act, passed unanimously by the U.S. Senate and signed into law on December 21, 2018.

The legislation commits the federal government to providing \$1.2 billion to fund activities promoting quantum information science over an initial five-year period; additional funding was also approved by Congress in its session ending January 1, 2021, leading to more than \$350 million for FY 2021 alone.

One important aim of the plan is to create new research centers that bring together academics from different disciplines—such as computer science, physics and engineering—to help conduct experiments and train future quantum researchers. Eight of these centers were launched in 2020, led by the National Science Foundation and the Department of Energy.

The quantum initiative act also encourages large companies and startups to pool some of their knowledge and resources in joint research efforts with government institutes. It also supports the Quantum Economic Development Consortium, which Taylor helped lay the groundwork for while at NIST in 2017 and at OSTP in the following years.

Finally, the Act calls for coordination of activities and outreach, both areas that Taylor actively engaged in. This included the creation of the National Quantum Coordination Office, which Taylor served as the first director; the launch of the Q–12 education partnership to enable middle and high school curriculum development and teaching of quantum concepts; and the launch of quantum.gov, which serves as a central home for federal QIS research and development.

“I am honored to receive the Gold Medal Award from the Department of Commerce, and feel a tremendous sense of gratitude to the quantum information science community for coming together to focus on a positive approach to change,” says Taylor, who has been embedded on the University of Maryland campus since 2009 and was the NIST co-founder and co-director of QuICS from 2014–2019.

Many voices in concert have enabled the United States to expand its resolution to advance new discoveries in quantum computing and quantum information science, Taylor adds.

“But there’s no sleeping on the job,” he says. “The national quantum coordination office and the federal, academic, and private sector teams all have a tremendous amount left to do. Still, I believe the foundation laid by myself and others at the start of this decade have put us in a place where the work moving forward will have the most impact—from enhancing middle school curriculums to building large-scale quantum computers.”

In addition to his work in QuICS, Taylor is a Fellow in the Joint Quantum Institute, where his research group is focused on three main areas: hybrid quantum systems, applications of quantum information science, and fundamental questions about the limits of quantum and classical behavior.

A Fellow of the American Physical Society and the Optical Society of America, Taylor is also the recipient of the Department of Commerce Silver Medal, the IUPAP C15 Young Scientist Award, the Samuel J. Heyman Service to America Medal: Call to Service, the Presidential Early Career Award for Science and Engineering, and the Newcomb Cleveland prize of the AAAS. He has published more than 150 scientific papers, several book chapters, and holds numerous patents in quantum technologies.