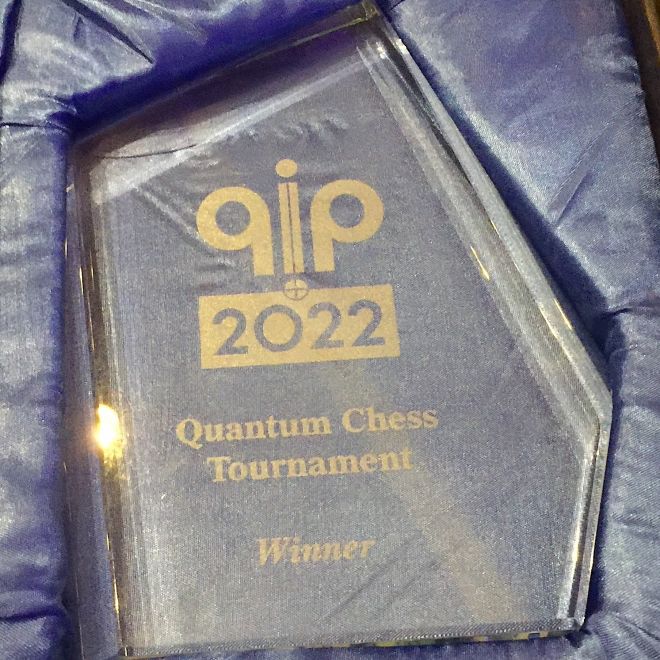 The 25th Annual Conference on Quantum Information Processing (QIP) that wrapped up on March 11 wasn’t all work. In its own version of March Madness, 64 QIP attendees were bracketed up to compete in a Quantum Chess tournament—a variation of the classic abstract strategy board game that introduces quantum features into the mix.

Wang, a fourth-year doctoral student advised by Andrew Childs and Carl Miller, says that he is grateful to have earned the top prize, although quantum chess “is probably 30% skill and 70% luck—literally, due to its probabilistic nature.”

“I’ve been very lucky to win,” Wang adds. “Especially in my games against Ewin Tang (quarterfinal) and Thomas Hahn (final), where I advanced by winning on what amounted to a literal coin toss.”

Luck aside, the rules of quantum chess add probabilistic superpositions and entanglement to the mix, while maintaining the same board pieces and almost all the rules of the standard game (exceptions involve the safety of the king and ending the game).

The new elements are introduced by additional legal moves where a piece can be directed to multiple squares—creating a superposition. Capturing or moving through a piece in a superposition entangles the involved pieces. These new rules then cascade into other rules about merging and collapsing the superpositions.

All these quantum-like effects add a whole new layer to the game: Kings can split into an army of duplicates that must be hunted down in the endgame. Crucial captures and board positions can come down to a coin flip. And if you really dive into the game, you can even exploit interference effects since each piece of a superposition carries its own quantum phase.

For players, like Wang, Quantum Chess is a fun and competitive arena where they can explore (and perhaps further develop) their intuition for some of the unusual realities that are hidden in the quantum world. The game developers agree, saying that they “hope that through play, the counterintuitive will become intuitive.”