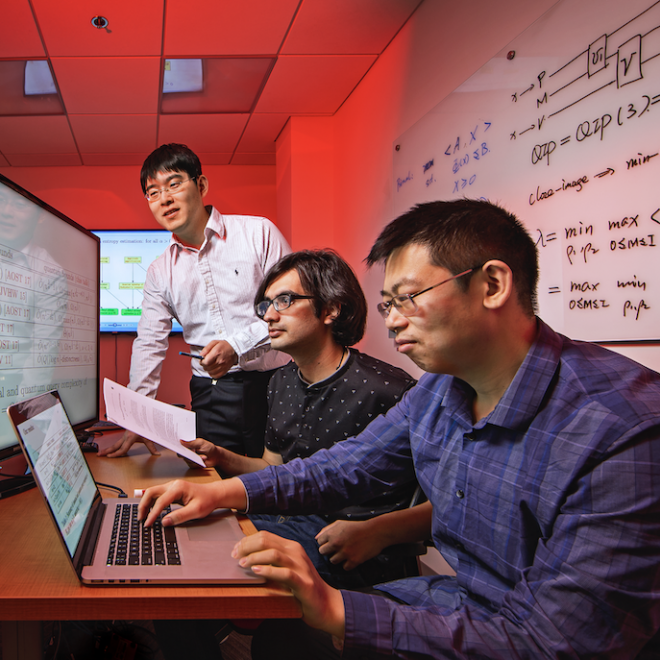 Xiaodi Wu (standing, background), an assistant professor of computer science and a fellow in the Joint Center for Quantum Information and Computer Science, is principal investigator of the NSF award, expected to total approximately $510,000 over five years.

The funding supports Wu’s efforts to bridge the gap between the theoretical foundation of quantum computing and the limitation of realistic quantum machines.

Wu, who has an appointment in the University of Maryland Institute for Advanced Computer Studies, expects the NSF-funded project to make fundamental contributions to research involving quantum algorithms, quantum machine learning, and quantum software foundation.

This includes designing quantum algorithms for sub-modular optimization and log-concave sampling; developing new functionality for variational quantum methods (or the so-called quantum neural networks) and their training methods; and leveraging techniques from formal methods and programming languages to certify the correctness of the implementation of quantum applications as well as to obtain concrete (rather than asymptotic) resource/error analysis.

Wu will integrate methods from the fields of theoretical computer science, theoretical and formal machine learning, and programming languages to address the unique research challenges in achieving end-to-end quantum applications. The research will help advance end-to-end quantum applications in all related fields, he says, such as physics, chemistry and material science.

The results will be disseminated through a variety of venues, including conferences, new course materials, expository writings, and high school open days aimed at exposing young computer scientists to the frontiers of quantum information research.

Wu received his doctorate in theoretical computer science from the University of Michigan, Ann Arbor in 2013.

“CAREER: On the Foundations of End-to-End Quantum Applications” is supported by NSF grant #1942837 from the NSF’s Division of Computing and Communications Foundations.

PI: Xiaodi Wu, assistant professor of computer science with appointments in the Joint Center for Quantum Information and Computer Science and the University of Maryland Institute for Advanced Computer Studies.

About the CAREER award: The Faculty Early Career Development (CAREER) Program is an NSF activity that offers the foundation’s most prestigious awards in support of junior faculty who exemplify the role of teacher-scholars through outstanding research, excellent education and the integration of education and research within the context of the mission of their organization.