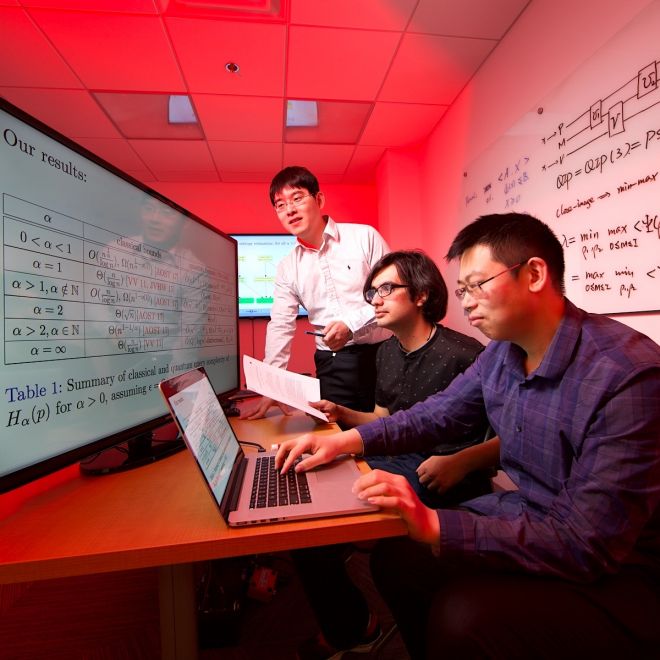 Dozens of scientists will meet at the University of Maryland Sept. 24–28 to discuss the emerging field of quantum machine learning, a discipline that seeks to wed the promise of quantum computing with the tools and techniques that help ordinary computers learn from data.

The workshop, hosted by the Joint Center for Quantum Information and Computer Science (QuICS), will bring together physicists, computer scientists and mathematicians to recap what’s known about the field and to present research from its frontiers.

It will be a chance to ruminate on the synthesis of two active areas of scientific study, says Xiaodi Wu (far left in photo), a QuICS Fellow and the workshop’s organizer.

“There’s been a revolution in machine learning that arose from the ability to process huge amounts of data, and quantum computers can sometimes reveal patterns in high-dimensional systems—though we don't understand exactly when this is possible,” says Wu, who is an assistant professor of computer science at the University of Maryland. “So it’s only natural to investigate how quantum computing might be applied to machine learning.”

At the moment, quantum machine learning is a bit of a catch-all for several research directions. One route seeks to find speedy quantum algorithms for solving classical machine learning problems—tasks like speech or image recognition that are the hallmarks of modern commercial applications. But this approach has proved difficult.

“It remains a big challenge to find classical machine learning problems that anyone cares about, with well-defined classical input and output, for which a quantum algorithm gives you an exponential speedup over the best classical algorithm that anyone can design for the same thing,” says Scott Aaronson, a professor  of computer science from the University of Texas at Austin who is attending the workshop.

Another research direction uses the tools of classical machine learning and computer science to explore quantum information from a new perspective. Along these lines, Aaronson plans to present work about the relationship between differential privacy—a technique for maintaining an individual’s anonymity in aggregated datasets, such as those consumed by machine learning algorithms—and certain kinds of quantum measurements.

Other work in this direction has found intriguing connections between particular types of neural networks and the correlations present in quantum information.

Wu says that there is still plenty of distance between in-principle findings and in-practice results, a discrepancy he’s planning to tackle head-on with the workshop. “We should show the public that we can do something interesting,” Wu says.

Researchers from academia, industry and government laboratories will be in attendance, and Wu hopes that gathering all these experts in one place will promote collaboration and help build a consensus about the most pressing open questions in quantum machine learning.

In addition to visiting experts, many UMD postdoctoral researchers, graduate students and undergraduates will attend the workshop. Wu says that a secondary goal is to generate some local interest in quantum machine learning. “I hope that, after this, especially students and postdocs can find a problem to work on,” he says.